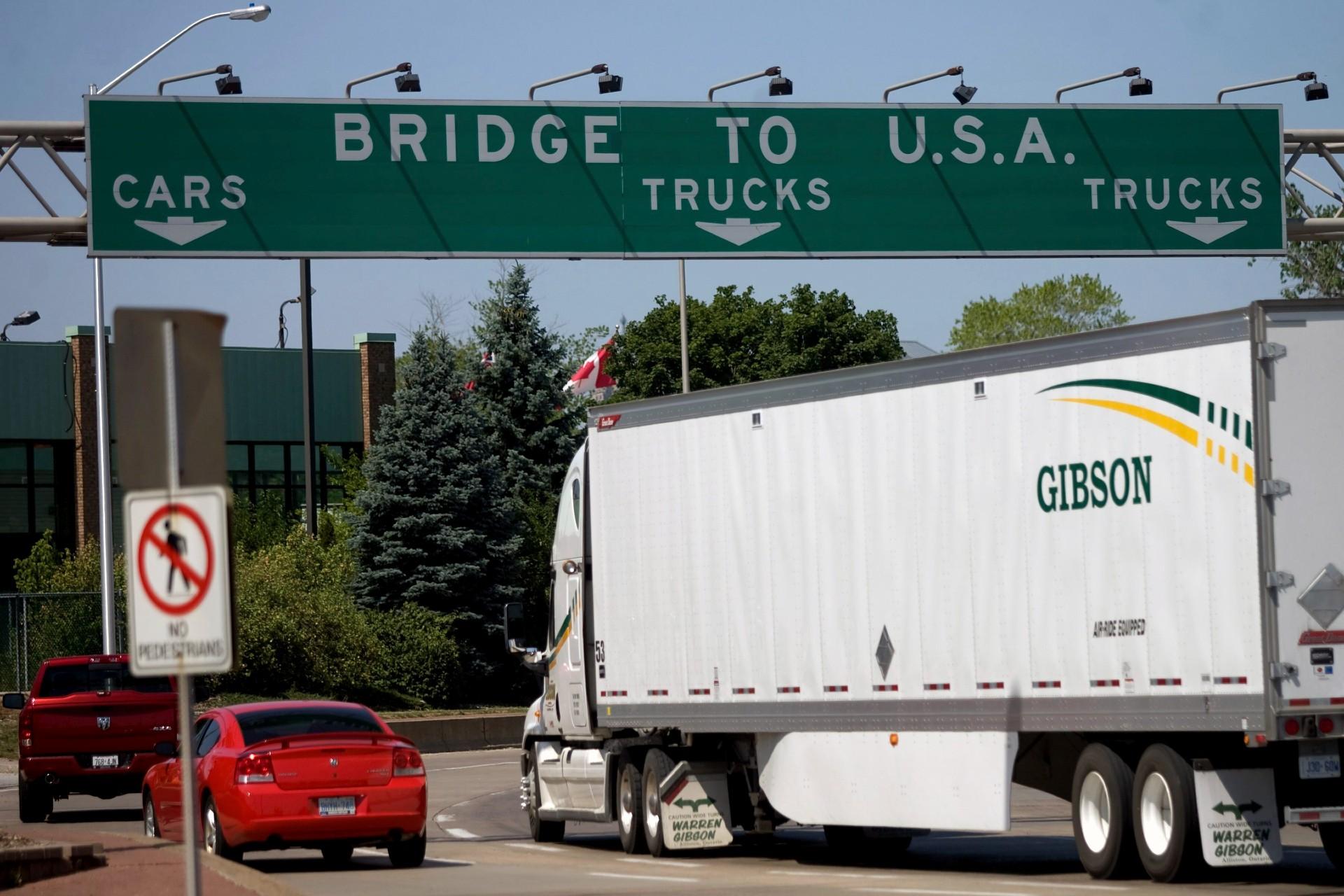 In this Friday June 15, 2012 file photo, Motorists make their way to Ambassador Bridge connecting Canada to the United States in Windsor, Ontario. (Mark Spowart / The Canadian Press via AP, File)

SAN DIEGO (AP) — Beleaguered business owners and families separated by COVID-19 restrictions rejoiced Wednesday after the U.S. said it will reopen its land borders to nonessential travel next month, ending a 19-month freeze.

Travel across land borders from Canada and Mexico has been largely restricted to workers whose jobs are deemed essential. New rules will allow fully vaccinated foreign nationals to enter the U.S. regardless of the reason starting in early November, when a similar easing of restrictions is set for air travel. By mid-January, even essential travelers seeking to enter the U.S., such as truck drivers, will need to be fully vaccinated.

Shopping malls and big box retailers in U.S. border towns whose parking spaces had been filled by cars with Mexican license plates were hit hard by travel restrictions.

San Diego Mayor Todd Gloria said the economic impact was hard to quantify but can be seen in the sparse presence of shoppers at a high-end outlet mall on the city’s border with Tijuana, Mexico. The decision comes at a critical time ahead of the holiday shopping season.

In Del Rio, Texas, Mexican visitors account for about 65% of retail sales, said Blanca Larson, executive director of the chamber of commerce and visitors bureau in the city of 35,000 people.

“Along the border, we’re like more of one community than two different communities,” she said.

The ban has also had enormous social and cultural impact, preventing family gatherings when relatives live on different sides of the border. Community events have stalled even as cities away from U.S. borders have inched toward normalcy.

In Sault Ste. Marie, Michigan, where hockey and ice skating are ingrained, the Soo Eagles haven’t had a home game against a Canadian opponent in 20 months. The players, 17 to 20 years old, have been traveling to Canada since border restrictions were lifted there two months ago. Now the U.S. team can host.

“I almost fell over when I read it,” said Ron Lavin, co-owner of the Eagles. “It’s been a long frustrating journey for people on a lot of fronts far more serious than hockey, but we’re just really pleased. It’s great for the city.”

Fully vaccinated U.S. citizens and permanent residents have been allowed into Canada since August, provided they have waited at least two weeks since getting their second vaccine dose and can show proof of a recent negative COVID-19 test. Mexico has not enforced COVID-19 entry procedures for land travelers.

The latest move follows last month’s announcement that the U.S. will end country-based travel bans for air travel and instead require vaccination for foreign nationals seeking to enter by plane.

The new rules only apply to legal entry. Those who enter illegally will still be subject to expulsion under a public health authority that allows for the swift removal of migrants before they can seek asylum.

Travelers entering the U.S. by vehicle, rail and ferry will be asked about their vaccination status as part of the standard U.S. Customs and Border Protection inspection. At officers’ discretion, travelers will have their proof of vaccination verified in a secondary screening process.

Unlike air travel, for which proof of a negative COVID-19 test is required before boarding a flight to enter the U.S., no testing will be required to enter the U.S. by land or sea, provided the travelers meet the vaccination requirement.

According to the Centers for Disease Control and Prevention, the U.S. will accept travelers who have been fully vaccinated with any of the vaccines approved for emergency use by the World Health Organization, not just those in use in the U.S. That means that the AstraZeneca vaccine, widely used in Canada, will be accepted.

Officials said the CDC was still working to formalize procedures for admitting those who received doses of two different vaccines, as was fairly common in Canada.

U.S. Homeland Security Secretary Alejandro Mayorkas said he was “pleased to be taking steps to resume regular travel in a safe and sustainable manner” and lauded the economic benefits of it.

Mexico, Canada and elected officials from U.S. border regions have pressured the Biden administration for months to ease restrictions.

“This is a win for families who’ve been separated and businesses and tourism industries whose operations have been blocked since the start of the pandemic,” said U.S. Sen. Jeanne Shaheen of New Hampshire, echoing reactions of other federal, state and local officials.

Cross-border traffic has plummeted since the pandemic, according to U.S. Department of Transportation figures.

The number of vehicle passengers entering the U.S. in Niagara Falls, New York — the busiest land crossing on the Canadian border — fell 83% to 1.7 million in 2020 and has remained low this year.

“Losing those customers over the last 18 months has been one of the primary reasons our hotels, restaurants and attractions have been suffering,” said Patrick Kaler, president and chief executive of Visit Buffalo Niagara, the area’s tourism agency.

The move toward restoring regular travel comes as COVID-19 cases in the U.S. have dropped to about 85,000 per day, the lowest level since July, following a spike from the more transmissible delta variant of the virus. Per capita case rates in Canada and Mexico have been been markedly lower in the two countries than the U.S. for the duration of the pandemic, which amplified frustrations about the U.S. restrictions on travel.

Justin Fields shows some encouraging signs — but needs to cut down on the ‘Krenzels.’ Brad Biggs’ 10 thoughts on the Chicago Bears’ Week...