Back in February the Eagle covered a story about Adam Dean, his 1955 International Harvester R-110 and the trip he planned to take with the pickup so that he could grab a bite to eat at George’s Hot Dogs in Chicago.

Adam Dean planned the 2,500-mile round trip from Lewistown, Montana to Chicago, Illinois to pay homage to his late father, Dale Dean, and to raise money for the Cancer Research Institute.

Prior to the journey, Dean brought the pickup to Ekalaka during this year’s Days of ’85 Fair and Rodeo.

“We had a great welcome from locals and people in the surrounding area,” he told the Eagle on Tuesday.

The pickup was at several events throughout fair weekend, including the parade and car show on Sunday.

“A lot of Dad’s classmates came and checked it out. A CCHS Class of ’69 bumper sticker got put on too.”

The nine-day trip to Chicago was completed a few weeks ago.

Over the course of the trip, Dean put 2,721 miles on the International (which he refers to as Rankin), burned 189 gallons of fuel and had one, 92-cent breakdown.

The breakdown was two bolts that rattled out near the heat riser. It took about 30 minutes to fix, and most of that time was spent waiting for the manifold to cool down so the bolts could be replaced.

The repair was made in Luxemburg, Iowa on the trip to Chicago. As luck would have it, when Dean and his family stopped in at the local hardware store there, they learned that they were only about six or seven miles from the Field of Dreams. So after the repair, they veered off course for a few minutes to check it out and had a chance to walk the bases.

“We wouldn’t have known about the field at all if we didn’t break down,” he said.

The trip started from Central City Auto & RV in Lewistown on September 25th.

“They gave us quite the send-off. Twenty or so vehicles, many classics, followed us from there to Grass Range. A few more joined in Grass Range and followed us to Miles City. One guy from Jordan jumped in too.”

Relatives from Dean’s mother’s side surprised him in Miles City. On the first night, he stayed in Baker where all of his father’s living siblings joined him. That evening, he said, was special.

On day two, Dean made it to Watertown, South Dakota as planned. On day three he pushed a few miles past his planned stop in Cresco, Iowa, opting instead to stay in Dubuque as there was an open RV park.

Day four of the trip ended in DeKalb, Illinois, a suburb about 64 miles outside of Chicago.

On day five he drove to Chicago and arrived at George’s Hot Dogs, sometime around noon.

“Some friends and family from the area joined us there and we ate our Chicago-style hot dogs. That was pretty neat.”

“I valet parked a 1955 International,” he joked. “The guy told me he didn’t know how to drive it so I parked it for him. All the guys at the valet were pretty bright eyed when that thing pulled up.”

Dean and crew checked out the Museum of Science and Industry the next day, ate some Chicago-style pizza and left town. The pizza was delicious.

“It was a lot better than the hot dogs,” he said.

Dean arrived back in Lewistown on the following Sunday, October 3rd. 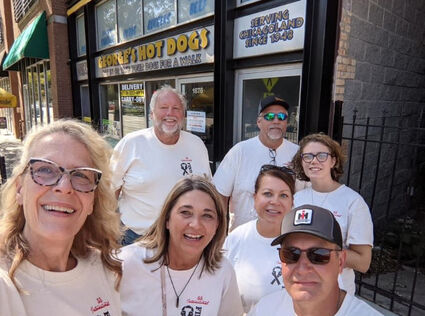 Friends and family from the area joined Dean at George’s Hot Dogs.

“Out of all the creature comforts in newer vehicles, I missed power steering the most. Nine days at 45 miles per hour is a lot of driving. Downhill it was maybe 47, but that speedometer never touched 50. I got three passes in on the entire trip. I passed a bicycle, a tractor and an old Buick. I made it back though. It was quite a trip.”

Dean doesn’t have a total yet on the money the trip raised for the Cancer Research Institute. He said that they have sold over 600 T-shirts and plans to end shirt sales this Saturday. He estimates that shirt sales, along with direct donations, will total somewhere around $14,000. Shirts were sent to 28 states and 4 different countries. Several were also sold at campgrounds and restaurants during the trip.

“I wouldn’t want to do it again in a 1955 International,” Dean said about the trip. “Well, maybe I’ll try again in 10 years and see if Rankin will make it there for another hot dog, just for the fun this time.”