Top US General Milley a Whisperer to Presidents, Target of Intrigue – NBC Chicago

Gen. Mark Milley has been the target of more political intrigue and debate in two years as chairman of the Joint Chiefs of Staff than any of his recent predecessors were in four. One after another, political firestorms have ignited around him — unusual for an officer who by law is a whisperer to presidents and by custom is careful to stay above the political fray.

From racial injustice and domestic extremism to nuclear weapons and the fitness of Donald Trump as commander in chief, Milley has become entangled in politically charged issues, regularly thrusting him into the news headlines.

Milley is expected to face tough questioning on those and other issues when he testifies with Defense Secretary Lloyd Austin at a Senate hearing Tuesday and a House panel Wednesday. The hearings originally were meant to focus on the Afghanistan withdrawal and the chaotic evacuation from Kabul airport last month.

But since then, Milley has come under fire from Republicans for his portrayal in a new book as having taken unusual — some say illegal — steps to guard against Trump potentially starting a war with China or Iran or ordering an unprovoked nuclear attack in the final months of his presidency. Milley was reported to have agreed with House Speaker Nancy Pelosi’s assertion in a January phone call that Trump was “crazy.” 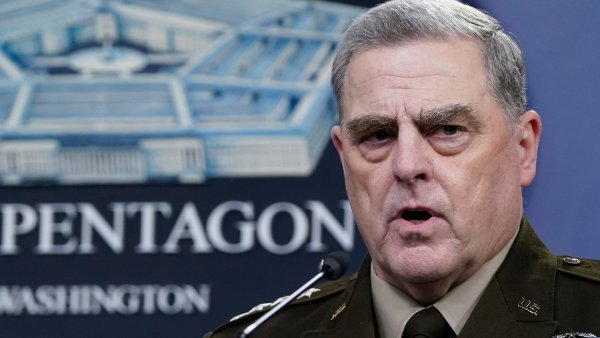 Even during Milley’s swing through Europe last week, headlines dogged him and reporters quizzed him. Mostly he batted questions away or buried them in detailed historical precedent.

Burly and square-jawed, with a bushy slash of eyebrows over often mischievous eyes, Milley is quick with a quip and frequently a curse. His oversize personality, born of Irish roots in Boston, belies a sharp intellect and a penchant for digging deep into military history. The Princeton-educated Milley often meets simple questions with a deep dive into history that can reach as far back as the Greeks, cover long stretches of both world wars, and expound upon the context and concepts of war.

So as he faced accusations of disloyalty for what the book “Peril,” by Bob Woodward and Robert Costa, reported as assurances to a Chinese general that he would warn him of a U.S. attack, Milley gripped his identity as a soldier who answers to civilian leaders. He declined to make his case in the media, instead telling reporters that he will lay out his answers directly to Congress. His only brief comments have been that the calls with the Chinese were routine and within the duties and responsibilities of his job.

“I think it’s best that I reserve my comments on the record until I do that in front of the lawmakers who have the lawful responsibility to oversee the U.S. military,” Milley said. “I’ll go into any level of detail Congress wants to go into.”

While some in Congress have charged that he overstepped his authority, President Joe Biden has stood by him.

Loren Thompson, a longtime observer of the U.S. defense establishment as chief operating officer of the nonprofit Lexington Institute, says Milley is a victim of Washington’s extreme partisanship and perhaps of his own efforts to shape his public image.

“His views and descriptions of his behavior behind closed doors, pop up too frequently in tell-all books like the Woodward and Costa book,” Thompson said. “So perhaps Milley has taken a more active approach to trying to shape his image, and that has not served him well.”

Not all of Milley’s controversies have been related to Trump. At a House hearing in June, Milley passionately defended the military’s openness to allowing young officers to study ideas they might not agree with, such as “critical race theory,” and he said he wanted to understand “white rage” and the motivations of those who participated in the Jan. 6 riot at the U.S. Capitol.

During a congressional hearing on the U.S. defense budget on Wednesday, Chairman of the Joint Chiefs of Staff General Mark Milley responded to a question on Critical Race Theory, pushing back against accusations of a ‘woke’ military. “It’s important, actually, for those of us in uniform to be open minded and be widely read. And the United States Military Academy is a university. And it is important that we train and we understand… it is important that the leaders now and in the future do understand it.”

Joint Chiefs chairmen traditionally keep a low public profile. Of the 19 who preceded Milley, none was fired, nor does it appear he will be. Among recent chairmen, only Marine Gen. Peter Pace served fewer than four years when the George W. Bush administration did not tap him for another two-year term, citing the divisiveness of his association with the Iraq war.

Created in 1949, the job of chairman is to advise the president and the defense secretary. By law, the chairman commands no troops. The role has grown in public prominence during the two decades of U.S. warfighting in Iraq and Afghanistan.

Milley commanded troops during tours in both wars. Those battles, where he lost many soldiers, helped chart his path as he rose from an armor officer in 1980 to Army chief of staff 35 years later.

Nearly a year before he was sworn in and just days before James Mattis resigned as defense secretary, Trump announced that Milley was his choice to succeed Gen. Joseph Dunford as chairman. The timing was unusually early in Dunford’s tenure, and it may have had as much to do with Trump’s antagonism toward Mattis as his belief that Milley was right for the job.

That’s how Trump described it when he lashed out at Milley this summer following reports that Milley had feared last year that Trump might use the military in a coup. Trump said he picked him as chairman to spite Mattis, who he believed didn’t like Milley. In fact, Mattis had recommended the Air Force’s top general for the job, not Milley.

Milley’s gregarious nature might have initially appealed to Trump, but he soon soured on him. In June 2020, Milley privately opposed Trump’s talk of invoking the Insurrection Act to put active-duty troops in the streets of Washington to counter protests sparked by the killing by Minneapolis police of a Black man, George Floyd.

Milley also expressed public regret at being part of a Trump entourage that strolled across Lafayette Square on June 1, 2020, to be positioned near a church where Trump held up a Bible for photographers. Critics hit Milley for appearing to be a political pawn. Days later, Milley said he had made a big mistake. Through the months that followed, he seemed at risk of being sacked by Trump.

In the book “I Alone Can Fix It,” Washington Post reporters Carol Leonnig and Philip Rucker reported that on the day President Joe Biden was sworn in, Milley expressed relief to former first lady Michelle Obama.

“No one has a bigger smile today than I do,” Milley said.